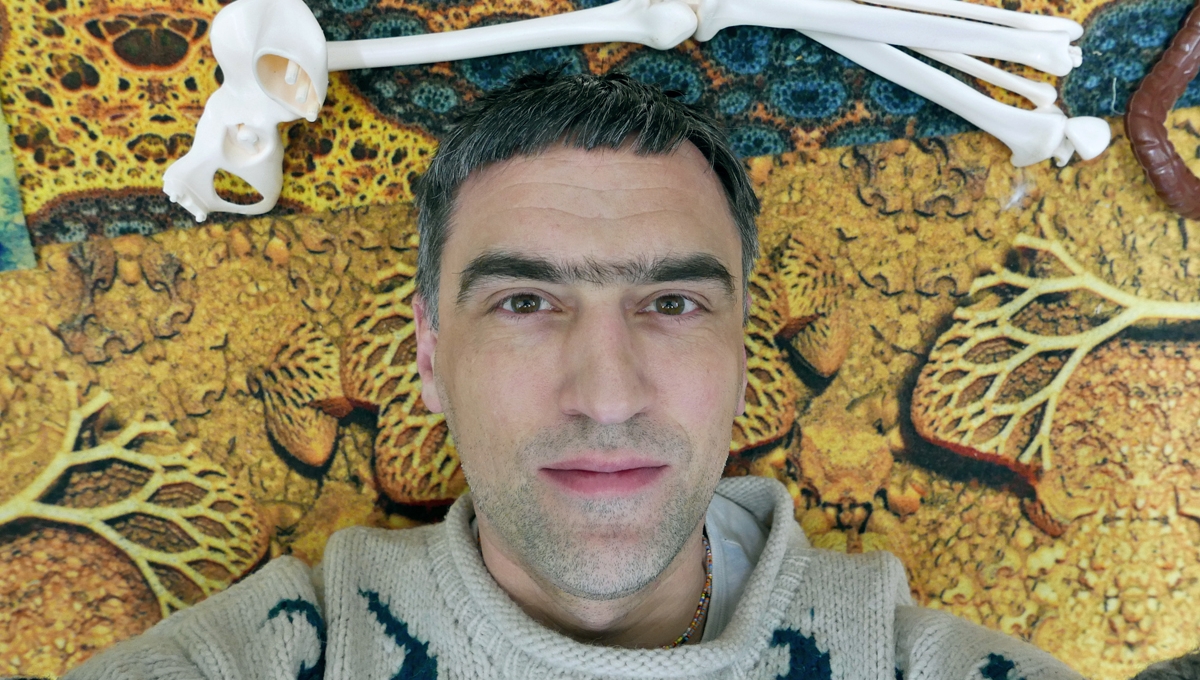 For the VRHAM! FORWARD, Markus Selg is part of the selection committee for the teams. The artist, stage designer and musician was awarded the German Theatre Prize “Faust” in 2020 for the stage design of “ULTRAWORLD”, a theatre performance he conceived together with Susanne Kennedy for the Volksbühne Berlin. At the end of February, the new common production “I AM (VR)” celebrated its digital premiere in Tokyo. Markus Selg is a researcher, someone who crosses borders. A conversation with him about experiments, multimedia spaces of experience and VR in theatre:

VRHAM!: Susanne Kennedy told in an interview about your new joint project “I AM (VR)”: VR … “is a tool that lets us realize what reality is in the first place.” What artistic potential does VR offer for the field of theatre, for the performing artists and the audience?
MARKUS SELG: VR is a kind of mirroring of the human sensory experience, directly in one’s own head. It is not only a powerful technology of simulation, but a profound tool for reflection on human perception and ego-consciousness. Who am I? Who is this avatar with whom we identify? Do we exist in the physical world or do we exist primarily within the stories our brains tell themselves. Who or what hallucinates these stories? If we live in our own simulation, how can we interact with others? Can we even distinguish between reality and simulation? With the walk-on stage and VR, theatre has the possibilities of total immersion with simultaneous collective presence in the space. Compared to cinema or computer games, our physical bodies can also be included in the theatre space. With the fusion of theatre, VR and art, a system can emerge within which we can create the most complex cosmologies – with the audience as actors at their centre.

V!: The current situation has brought many things out of balance, has accelerated developments and opened up new areas. What should theatre “learn” from this?
MS: Theatre is now slowly opening up to digital thinking and virtual technologies. Right now, however, there is still a lot of forced actionism – like the streaming of conventional plays. I see the opportunity more in fundamentally envolve the form of theatre. If we extend the fantastic but somewhat cumbersome theatre machinery into digital space, a wide variety of actors – human, non-human, biological and synthetic intelligences – will have the opportunity to play together. Physical limitations can be lifted and navigating between worlds can become more fluid. A platform can emerge that will come closer to the idea of the Gesamtkunstwerk than any art form before. The venue where we will perform our algorithmic rituals and celebrate life in its entirety and its mysteriousness.

V!: You are on the jury for VRHAM! FORWARD, which is explicitly aimed at artistic teams. Does art only work together? What benefits do you see in collective artistic process?
MS: Art works quite well on its own, but I am most fascinated by the collective process. The magic that happens in the interaction between people. When a work is created that was actively envisioned by each individual, but no one could have dreamed of the result on their own. I see the stage as a kind of ritualistic architecture for community, a system of collective dreaming. An experimental space for a collective practice. How can you generate a creative situation and make it so concentrated and open that everyone can best contribute with their abilities?
22. March 2021/by Helen Peetzen
https://www.vrham.de/wp-content/uploads/2021/03/markus.jpg 800 1200 Helen Peetzen https://www.vrham.de/wp-content/uploads/2020/03/logo_vrham_weiss.svg Helen Peetzen2021-03-22 14:51:472021-03-22 15:21:59Most Complex Cosmologies