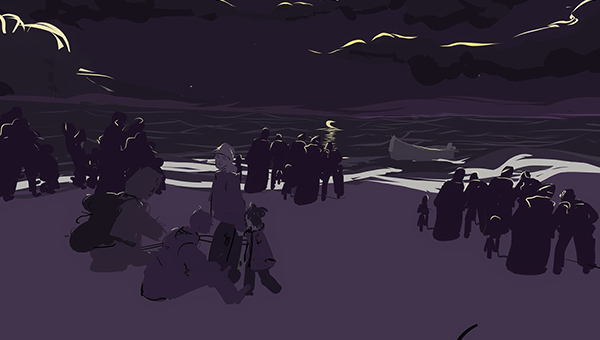 To commemorate the second anniversary of the death of Alan Kurdi, the three-year-old Syrian boy who drowned while attempting to reach Greece in 2015, the author Khaled Hosseini, a UNHCR goodwill ambassador, has written “Sea Prayer”. This imagined letter is written in the form of a monologue, delivered by a Syrian father to the son lying asleep in his lap, on the eve of their sea crossing to Europe.
Hosseini is the author of “The Kite Runner”, “A Thousand Splendid Suns” and “And the Mountains Echoed”. “Sea Prayer” is the first narrative animated virtual reality film created using “Google Tilt Brush”, a tool for painting in a 3D space with VR. Using this tool, the Guardian’s in-house VR team, in collaboration with the acclaimed VR artist Liz Edwards, has brought Hosseini’s sensitive imagining of this letter to life.
Narrated by the Bafta-winning actor Adeel Akhtar, who takes the role of the father, Sea Prayer reflects on the city of Homs, a devastated war zone where he grew up and which he is being forced to leave behind with his son. Hosseini’s piece also meditates on the dangerous sea crossing that lies ahead.
“Sea Prayer” is accompanied by a score specially composed by Sahba Aminikia, an Iranian-American contemporary classical music composer, and performed by the US-based string musicians Kronos Quartet and the musical saw player David Coulter.
People continue to attempt this journey, many losing their lives in the process. Since Alan’s death, at least 8,500 refugees and migrants have died or gone missing trying to cross the Mediterranean Sea.
This piece was made in collaboration with the UNHCR.