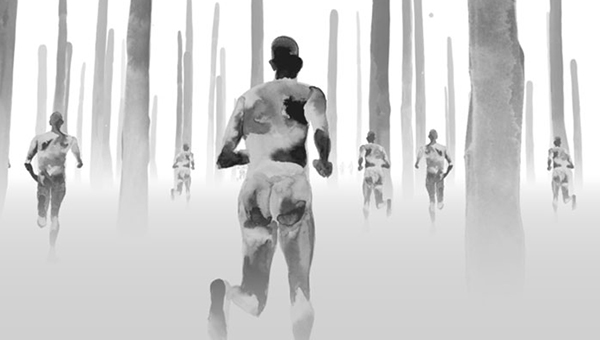 In Shalenny’s VR work the viewer goes beyond the horizon on a compressed forty thousand kilometers journey around the world. A game of chance, the journey is the outcome of a line drawn from a bridge and further across the world, taking place in the dead of night, where fuzzy silhouettes of people tear along through desolate landscapes, fleeing into gray blizzards and shadowy forests. Based on watercolors by the artist, one setting replaces the other as the ghostlike figures cross birch forests, oil fields, abandoned churches and oceans in a limitless universe.
Shalenny has long been fascinated by the idea of the bridge in his works, taking the bridge as a starting point for imagining a way of escaping the ongoing crisis in the land where he resides. Or as he expresses it: “The idea of escaping is unconscious, it sprouts and becomes a young tree. Every morning I go to the yard with an axe and hack it at the root, banishing the wrong thoughts. The next morning it grows above me twice, its rustling leaves talking to the wind, which have already been everywhere.”
Mentally extended to infinity, the bridge like the horizon is set between two places, the scene of arrival and the point of departure. All horizons disappear in space, and yet the strong conviction that there is a better world beyond the horizon lives on.
Seen in the light of the current global refugee crisis the infinite bridge seems like a symptom of our times, or, a cure for an escape attempt. The construction of a bridge allows one to access the other shore with ease, to solve the gap between longings and goals and dreams, which else remain distant.