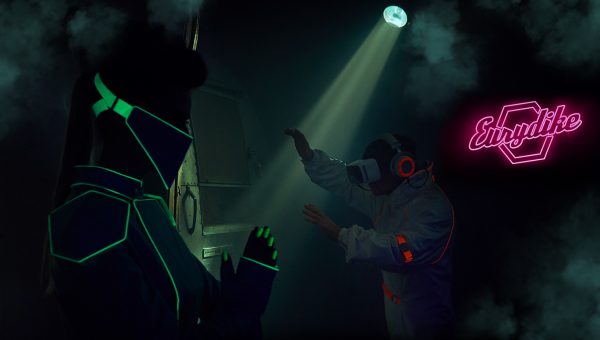 VR IS (NOT) ART!
IS VIRTUAL REALITY REALLY ART?

The number of curated exhibitions on Virtual Reality art is growing, with the potential and application of immersive media reaching ever new dimensions. But is creating visual worlds and soundscapes in VR really a new and independent art form, or a mere technical medium presenting a new perspective on art?

creates new, interactive virtual-analog worlds and immersive experiences by the extraordinary fusion of visual arts, opera, film, games and high-tech.
Coming from a classical background of theatre direction and scenography, Evelyn experimented very early with new technologies developing unique hybrid artistic forms, which deliberately break with conventional genre and audience structures. The Experience Director and Innovation Artist has received multiple awards for her transboundary works – e.g. for room-/video-installations, multimedia-performances, interactive environments. EURYDIKE and O.R.PHEUS – both mixes of art installation, music theatre and real-life game, using AR and VR technologies – attracted international attention with many nominations (i.a. for the German Computer Game Award) and werde honored by the German Government. EURYDIKE is till 1.5.2018 at Theater Rampe Stuttgart playable. Beside her own productions the VR/AR-Pioneer also works as Creative Mind for big brands – e.g. Resident Evil 6, Bioshock Infinite -, Speaker and Moderator. She created the new study subject “New Realities – presentation forms for the digital age” at the University of Bayreuth and was therefore appointed as Head of Programs Europe for the International Symposium on Mixed and Augmented Reality. Hriberšek lectures, talks ans writes about artistic and philosopical aspects as well as about ethical and social challenges, chances and risks of virtual future scenarios. As Architect of Tomorrow she believes in an ethical code and responsibility of inventing and using new media and tech.