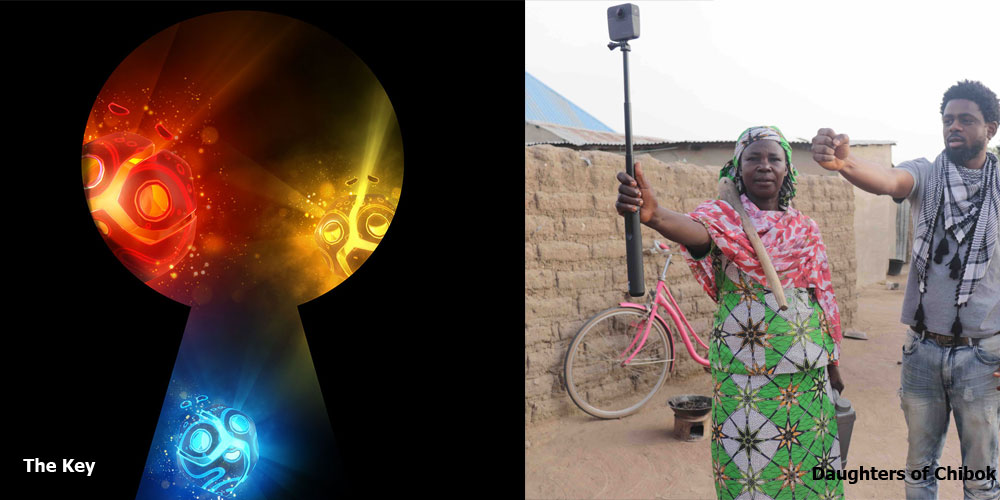 The VRHAMMY AWARD 2020 of this year’s digital edition of VRAHM! Virtual Reality & Arts Festival goes to the VR work The Key by Celine Tricart. 360° film Daughters of Chibok received a special mention.

During the virtual opening ceremony at the Museum of Other Realities, the VRHAMMY Award for the best VR work in the artistic program, endowed with 5,000 euros, was presented to Celine Tricart for her Experience The Key, with the kind support of the ZEIT-Stiftung. The international jury of experts (Liz Rosenthal, Jesse Damiani, Kay Watson) agreed that the work represented a perfect combination of art, narrative elements and poetry, with a special focus on the current crises of the time. The Key takes viewers on a journey through dreams, challenges and difficult choices, leading them to a shocking revelation. Celine Tricart and producer Gloria Bradbury decided to donate the prize money to a support fund for diversity in XR art.

The jury also gave a special mention to the 360° film Daughters of Chibok. Through the medium of VR, director Joel ‘Kachi Benson succeeded in drawing attention to an event that has long since been forgotten: the abduction of 274 girls by the terrorist group Boko Haram in 2014. Both experiences are shown in the VRHAM! section VREXHIBITION and can be seen at the Museum of Other Realities until 4 August 2020. Daughters of Chibok is also accessible via the Magenta VR app.

“We all know an experiment can succeed or fail. But if we succeed, this experiment might have a huge impact on how people can experience art in the future and how they think about festivals and social interaction in an artistic context,” said Ulrich Schrauth, Artistic Director of VRHAM!, in his opening speech. “And it is also a step towards democratization of art: it makes our program accessible from almost anywhere in the world.”

In addition to the VRHAMMY Award, the festival also presents the People’s Choice Award, for which online voting is now possible. All 18 works of the artistic programme compete. The award ceremony will take place on 7 June as part of the virtual closing event.

VRHAM! Virtual Reality & Arts Festival Hamburg is the first international artistic Virtual Reality festival, which has been held annually in Hamburg since 2018. After two successful festival editions in Hamburg’s creative centre Oberhafen, VRHAM! has firmly established itself as an important date in the international VR art scene. Due to the effects of the Corona pandemic, the third festival edition VRAHM! VIRTUAL takes place from June 4 to 7, 2020 as a predominantly digital festival.